One of the most famous things the Egyptians were known for is hieroglyphs. This cryptic script was indecipherable until 1822, by Jean Francois Champollion, a French Egyptologist. He cracked the code of hieroglyphs by using a tablet called the Rosetta Stone. Hieroglyphs gave Egyptologists an insight into Egyptian society, rather than just going by the artifacts. Of course, the Egyptians were not the first culture to develop writing. Mesopotamia was. However, they were the only culture to start with pictographs and keep them. In hieroglyphs, a drawing can mean both a sound or a word. For example, a drawing of a hand means both a hand and the letter "d". (Discovering Egypt)


The hieroglyph alphabet contained more than 700 symbols for words and thousands more for sounds, and scribes had to train for a long time to learn to write with hieroglyphs. (Discovering Egypt) Hieroglyphs, along with other ancient forms of writing paved the way for written communication today, and we wouldn't be anywhere without it. Here are some examples of hieroglyphs.
This message reads, "Give us a good grade" Source 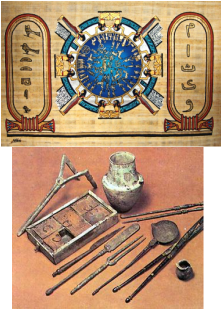 Another invention credited to Egyptians is the 365-day calendar. This is a vital part of our society today, in keeping time. Instead of following the lunar calendar, like most ancient civilizations, the Egyptians followed the solar calendar, devising a system of twelve months with thirty days each (Ancient Egypt Online). Five extra days were added later.

Egyptians thought of lots of inventions, but one of the most important today is the idea of organized labor. When you think about it, lots of the things we did today are only possible because lots of people worked tirelessly on it. The pyramids, of course, are one, and so is the Statue of Liberty, the Roman coliseum, and the Taj Mahal. Even construction projects today have many people working on it, albeit with tools. But the core concept remains the same. There are some things one person just can't do. Before this idea, the only reason people worked together was because they had a common goal. These people probably got paid by supervisors, which is the very idea of organized labor. (Ancient Egypt Online)

Medical technology in ancient times was never thought to be very safe, but the Egyptians learned a lot about the human body by making mummies. They knew how to mend broken bones, make stitches, and use bandages. (Social Studies Textbook) It doesn't seem like much when your think about our doctors who can perform brain surgery and replace muscles, but it was very advanced for its time period. The ancient Egyptians also invented the first medical books, filled with knowledge they had accumulated over the years of study.(Social Studies Textbook)

Pictured above, a calendar and a medical kit.

Egyptians made the world's first paper from papyrus, which is a tall, aquatic, reed-like plant. They used the fibers from it to be woven together into paper. (Ancient Egypt Online)  ﻿Source  ﻿ 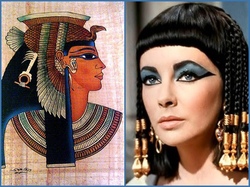 Ancient Egyptians also invented the world's first eye makeup. It was called kohl and used for fashion purposes and to protect them from the harsh desert sun. (Egyptian Make Up) It was made out of soot and other things, mixed with water, and applied to your eye.

Egyptians also had to invent complex (for its time) mathematics to build the pyramids, like geometry, and they were the first to write down their equations, (Social Studies Textbook) a practice that seems commonplace today. 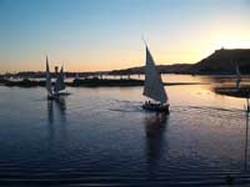 One more thing the Egyptians invented was the sail. This revolutionized transportation across water, and let them travel across the Nile without using rowers. (Ancient Egypt Online) This invention was inevitable; living so close to the Nile, they would have had to devise another system, had they not thought of this.
Now, some FAQs about ancient Egyptian Key Features and Inventions!

Egyptian scribes were considered high class, because not many people knew how to write back then. Only men could be scribes, and boys traditionally learned it from their fathers. They used ink-mixing palettes, writing reeds, and a leather pouch to hold ink blocks.

The ancient Egyptians made many advancements in medical technology such as healing broken bones, making stiches, and curing diseases. (Social Studies Textbook) They had the best doctors of the age. Their doctors learned all this from making mummies. They had to cut open the bodies to remove the organs, and figured out how things worked in the body. However, in some cases, when there was no obvious sign of an illness, they would put it down to a supernatural occurrence. They would utter spells and make potions to drive any unwanted spirits away from the body. (History Learning Site) So the ancient Egyptians' medicine was a mix of religion and science. We got rid of the religion part in the 21st century, but the ancient Egyptians' work paved the way for our now advanced medical technology.


Ancient Egyptian society was organized into five social classes. In order of highest to lowest the social classes are pharaoh, high class, middle class, lower class, and the unskilled workers. High class consisted of priests and nobles. They were the rich people who had servants and dressed in lavish clothes. They lived in multi-story houses. Middle class would be artisans, teachers, scribes, and shopkeepers. These were average people who usually did not have servants, and they dressed more down-to-earth than the higher class. The middle-class people lived in one-story houses. The second-to-last group on the list are farmers and herders. They lived in mud brick houses, usually in extended families, because that provided more people to work on the fields. They had to pay rent to the landlords with parts of their crops that year. The lowest group is unskilled workers. These people were the lowest social class in Egypt and they had to do all the things no one else wanted to do, like dragging things off boats. They lived in crowded neighborhoods and lived in extended families.


I would pick to be a priest, because they got to handle all the religious things, and also advise the pharaoh on religious matters. Not to mention they were honored by the society, favored by the pharaoh, and therefore were rich. Some advantages of what I've chosen are that which I have just mentioned, but there are disadvantages too. I would have to act as the god's servant, and I don't want to do that. Also if I do something wrong, everyone will know, and I would take a hard fall.